"The Possibilities" is the second episode of the first season of Preacher, and the third episode overall. It aired on June 12, 2016.

In Houston, Tulip O'Hare met with a woman named Dany. Tulip traded the map she obtained with her in exchange for the last known address of an individual. Tulip then had a flashback of a job by that address, where her relationship with Jesse went downhill.

Dany then drops by a pop-up theater to meet up with a man. The man dismissed her and then left the theater.

DeBlanc and Fiore's investigation continued back at Sundowner Motel. The two told Hugo that something had got loose and they were in an undercover investigation. Hugo asked if it was a prisoner who got lose. Both individuals gave an opposite answer but DeBlanc then changed his. Once Hugo left, the two decide they should try again that night, revealing a load of armed weapons beneath a comforter.

Emily dropped by the Loach house, where she learned that Tracy Loach after Jesse Custer had prayed with her.

Donnie walked his son, Chris Schenck to his school bus. Donnie explained that what happens between him and his mother is complicated. Chris then told his father that a boy had been telling everyone in his school that he (Donnie) made a "noise" during a fight with Jesse. Chris told his father he defended his fathers honor and hurt that boy badly. At the bus stop, Linus asked who a girl was, presumably the one who had urges over. Linus asked if it was her first day but a friend told him it was her "900th". Suddenly, a child saw Donnie and exclaimed "It's the bunny man!", enraging Donnie.

At All Saints' Congregational, Cassidy answered the door, where he saw Ted Reyerson's coffin. Emily Woodrow then asked Cassidy to handle his body. When Cassidy grabbed the van keys, he stopped by to check on Jesse. Jesse then told Cassidy he wished to show him something.

After speeding, Tulip was pulled over. Tulip pulled a gun and hid it beneath her legs. When she showed her fake identification, the cop noted she didn't look Hungarian. Tulip lied and claimed she used to serve in the military. She then told the cop she was speeding to get to a friend who was making life decisions. The cop then left and Tulip sped off.

Back at All Saints', Jesse tested his powers on Cassidy, making him do embarrassing things. Once Jesse was done, Cassidy was left excited over Jesse's newfound powers.

At Quincannon Meat & Power, the receptionist dropped off a letter on Odin Quincannon's desk.

Back at All Saints', Cassidy brainstormed possible explanations on Jesse's power.

At Sundowner Motel, Fiore watched the funeral of Tom Cruise prior to leaving.

Back at Quincannon Meat & Power, Donnie read a letter from Green Aacre, a company which wished for a joint business with QM&P. Quincannon then had Donnie clear his lunch tray, which he struggled to do due to his broken arm.

After cremating Ted's body, Cassidy saw the van of Fiore and DeBlanc drive by.

Wile Jesse was driving down the road, Tulip drives by and the two pulled over. Tulip showed Jesse the address of Carlos. Tulip proposed that they go after Carlos and kill him. Reluctant at first, Jesse decided to follow Tulip.

At night, when Fiore and DeBlanc walked toward the church, they were run over and killed by Cassidy. When Cassidy approached them, he believed they were clones due to him killing them not long before. Cassidy ran into them in the church once again and they explained they were after Jesse, before Cassidy killed them yet again. They tell Cassidy he had something of theirs and they needed it contained.

At a gas station, while Tulip was arguing with another driver, Jesse decided to tell Tulip something. When Tulip calmed down, Jesse decided not to and left for the restroom. In the restroom, Donnie came from behind and pointed his gun behind Jesse's head. Embarrassed, he wanted Jesse to make a noise to. Jesse however, used his divine commandment and had Donnie put the gun in his mouth. Jesse decided not to succumb to his past ways and let Donnie go. Jesse then told Tulip he changed his mind and left her.

Back at All Saints', the two men explained to Cassidy that people would die if they didn't retrieve what Jesse had inside him. They told Cassidy they didn't want to do anything with it and no one should. They then reveal they originate from heaven. Cassidy then told the two he would try to convince Jesse to go to them, rather than them to him.

At the Root house, Eugene Root suggested if they should visit Tracy Loach, though his father told him to stay away.

The following day, Jesse held a funeral for Ted, though only Emily showed up. 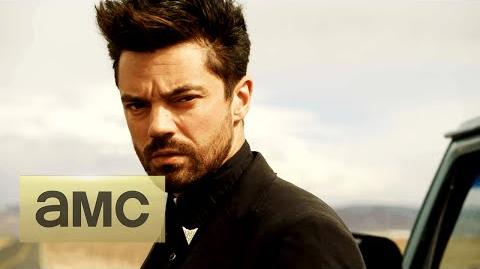 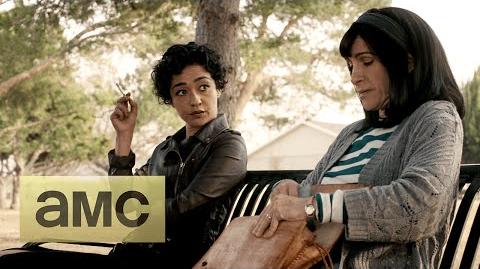 Jeffrey Everett (Rockets are Red) for Preacher episode 102.
Add a photo to this gallery

Retrieved from "https://preacher.fandom.com/wiki/The_Possibilities?oldid=11276"
Community content is available under CC-BY-SA unless otherwise noted.