For the episode, see Sundowner.

Sundowner Motel is a roadside hotel in Annville. The motel is a subsidiary of Quincannon Meat & Power.[1]

The Sundowner Motel is newly renovated, no longer having bug infested beds. Throughout the entire motel, there are three colored TV's, with the remaining presumably still black and white or without TV's. They offer a number of clean towels. The motel also has a newly installed vending machine to provide snacks.[1]

When DeBlanc and Fiore tracked Genesis to have merged with Jesse Custer in Annville, the two stayed at Sundowner Motel. When a maid asked Fiore if he wished to have one or two towels, the maid spotted Fiore holing a gun and ran off. The following day, Hugo arrived at the motel to question the two.[2] When Hugo left, Fiore uncovered the comforters where they hid their guns.[3]

A long fight ensued in one of the Sundowner Motel rooms between Jesse, DeBlanc, Fiore, and later Cassidy against Susan, a seraphim.[4]

The room was found all covered in blood and damaged by a maid. The maid called Hugo Root. Hugo found Susan in the bathtub articulated, where he mercifully suffocated Susan.[5] 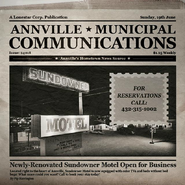 Retrieved from "https://preacher.fandom.com/wiki/Sundowner_Motel?oldid=8535"
Community content is available under CC-BY-SA unless otherwise noted.