For the motel, see Sundowner Motel.

"Sundowner" is the fifth episode of the first season of Preacher, and the sixth episode overall. It aired on July 3, 2016.

Jesse finally comes face to face with DeBlanc and Fiore, and learns about the mysterious entity that has taken over his body.[1]

Jesse used his powers to force DeBlanc and Fiore to reveal what is inside him. Jesse learned that it's the spawn of an angel and a demon. A woman nearby got up and left Flavour Station. DeBlanc and Fiore followed her. The two beat her down but Jesse came to her aid. Susan however, grabbed Jesse by the throat. When DeBlanc came to his aid, Susan grabbed him by the throat. Fiore shot Susan in the back of the head. They put her in her car's trunk, picked up her phone and when they were about to go to their car Fiore realized that he forgot his keys in Flavour Station. Susan reemerged in Flavour Station and the two fleed into Jesse's truck. They drove back to Sundowner Motel.

On the drive to Sundowner Motel, Jesse was told that Susan was a seraphim. Jesse asked if he could use the heaven phone to call heaven but was told he needed angel hands. Meanwhile, Susan claimed Fiore's keys and investigated their truck. Susan found a bible which belonged to the Sundowner Motel.

At the motel, the two angels told Jesse they were being hunted due to them being on Earth without permission. They explained that Genesis needed to be kept a secret or angels and demons would want it. Susan interrupted the three and a long battle ensued filled with the angels reinvigorating after dying. Cassidy eventually joined the fight and after a long battle, knocked her unconscious. Fiore then disarticulated Susan with a chainsaw, making her immobile. The two angels ordered Jesse to return Genesis but the two were denied.

At Annville High School, Eugene had a friendly greeting, much to his surprise.

Tulip stormed into Emily Woodrow's house demanding Emily to stay away from Jesse as she broke Emily's daughter's art project. Emily stormed to Tulip's car and scolded her for breaking her daughter's art. Tulip returned to Emily's house and said that she would fix the broken art.

Miles listened to voice messages from Green Acre Group. The company asked Miles if they knew anything about what happened to the Green Acre executives that were supposed to visit Odin Quincannon.

While fixing the art she broke, Emily and Tulip engaged in an awkward conversation.

Jesse and Cassidy shared drinks while their blood-soaked clothes were being laundered. Meanwhile, the two discussed their tattoos.

At Annville High School, Eugene was joined by Scott Loach and his friends for lunch.

Back at Emily's house, Tulip offered to watch over Emily's daughter as she did errands for Jesse. Emily noted her worries and Tulip said she understood, noting she once had a daughter. Tulip then offered to run the errands instead.

At All Saints' Congregational, Jesse set up a large speaker on the roof, during which Cassidy urged Jesse to listen to the angels.

While setting up chairs outside his church, Jesse was joined by Miles. Miles asked if he should do something bad as it would hurt less people. Due to the vagueness, Jesse asked Miles to explain more but Miles refused. Jesse was then distracted as he saw Tulip running the errands rather than Emily. In the supply closet, Cassidy realized Tulip was Jesse's Tulip. As Jesse came by, Tulip hid Cassidy behind the door. Tulip explained that she was helping Emily with the errands.

That Sunday, Emily told Jesse that Eugene needed to speak to him urgently. Jesse thanked Emily and Tulip for helping setting the church up. Emily then brought Eugene to Jesse. Eugene asked Jesse to take back what he made Terri Loach do. He explained that it didn't feel right and felt it was cheating. Eugene told Jesse he shouldn't force people to see the light. Eugene explained it was a sin but Jesse said that he shouldn't be lecturing him on sinning. Jesse eventually snapped and told Eugene to go to Hell. Suddenly, Eugene vanished.

Miles called the Green Acre Group and told them something horrible happened to the company's executives, setting them up to appear as though they were involved in a terrible car accident. 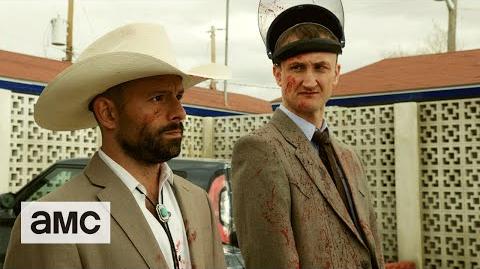 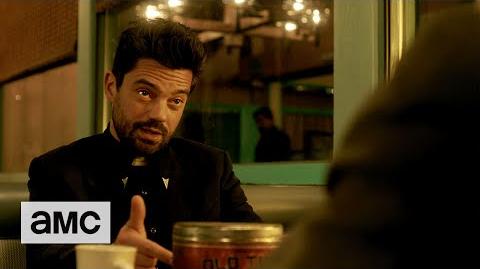 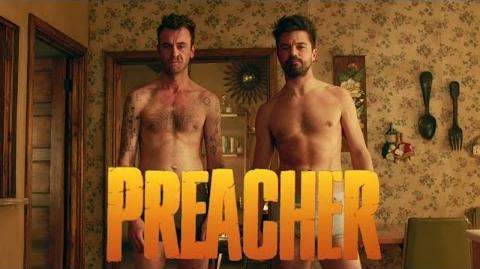 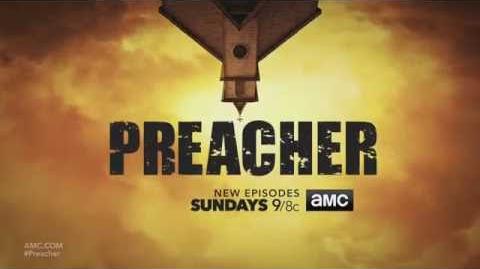 Cuyler Smith for Preacher episode 105.
Add a photo to this gallery

Retrieved from "https://preacher.fandom.com/wiki/Sundowner?oldid=13697"
Community content is available under CC-BY-SA unless otherwise noted.