"See" is the first episode of the first season of Preacher, and the second episode overall. It aired on June 5, 2016.

Jesse tries to be a "good preacher," unaware that a mysterious duo is after him. Meanwhile we meet the enigmatic Cowboy.[1]

In the year 1881, a cowboy leaves his home, searching for medicine for his sick daughter. Along the way, he encountered some travelers from St. Louis, who believed the West was a paradise. While travelling into Ratwater, the cowboy saw a tree with Native Americans hanged and their scalps torn off.

Back in present times, Jesse baptizes his congregants. Meanwhile, DeBlanc and Fiore watched from a distance. Tulip asked for her sins to be washed away and she was begrudgingly baptized by Jesse. Tulip once again, asked Jesse for help with that "job". After the baptisms, the congregants headed into the church for cappuccinos. Emily is asked by Cassidy for an advance for "fixing" the air conditioner, though Emily denied Cassidy. Soon after, Emily told Jesse that Cassidy had drank a cask of communion wine and told him to see to drop by and visit Tracy Loach. When the Root's left, a parishioner yelled our "murderer!". Though Hugo Root confronted them, his son told him to let it go. Meanwhile, Linus confessed to Jesse that he had urges to "do" stuff to a girl he drives on his school bus. Linus was told to not give in to his urges.

Odin Quincannon and his employees arrive at a couples home. Odin purchased their land and immediately had his men tear their house down. As Quincannon's men leave, Donnie Schenck shoved Clive's face into the steering wheel twice.

Jesse and Emily solicit suggestions at a local grocery store. During this time, Jesse watched as Linus drove by in his school bus. When Jesse returned to his truck, he found his steering wheel was missing. Tulip then drove by and mocked Jesse for choosing a dull life.

Jesse eventually made his way back to his church, where he was greeted by Cassidy. Jesse learns from Cassidy that the latter is a vampire. When Cassidy took a sip from his flask, Jesse asked what it was. Cassidy told Jesse he couldn't consume it as it is too potent for a human. Doubting Cassidy being a vampire, Jesse took a sip and passed out instantaneously.

At a hotel, DeBlanc and Fiore left with a large trunk. During this time, Cassidy took a cruise in Jesse's truck.

DeBlanc and Fiore arrived at All Saints church, standing over Jesse. The two attempted a lullaby but failed. The two then tried the next step, using a chainsaw. Before the two could cut Jesse up, Cassidy returned and called them out, believing they were vampire-hunting religious vigilantes. Cassidy was shot by DeBlanc, though Cassidy would bit into DeBlanc's leg and kill him when he approached. Cassidy then fought over Fiore for a chainsaw. Cassidy managed to turn the chainsaw to cut off an arm of Fiore, though Fiore's arm remained on the chainsaw. The chainsaw proceeded to move toward an unconscious Jesse but Cassidy managed to stop it in time.

Meanwhile at Toadvine, Tulip beat a group of Quincannon Meat & Power employees in a game of poker. After defeating the men, Tulip had a call from Dany, telling her she would see her soon.

Back at the church, Cassidy cleaned up the blood and had DeBlanc and Fiore stuffed in their large trunk. As Cassidy brought them outside to bury them, Cassidy was upset as the sun had already risen.

Jesse woke up shortly after and Emily had brought him a casserole to deliver to Terri Loach. When Jesse went to visit Terri and her comatose daughter, Jesse tried to comfort Terri. Terri however told Jesse that his words wouldn't heal Tracy. As Jesse left their house, he saw Linus drive by yet again.

While driving at night, Jesse stopped to investigate a car seat in the middle of the road. Jesse was suddenly tasered and brought to Toadvine. His captor revealed herself to be Tulip, who told him she wouldn't take the job unless he did it and she would keep nagging him to help. Tulip then told Jesse he would eventually go back to his old ways and left, telling him that she never actually locked him up.

Jesse returned to his church to cut the chains off with a saw. Jesse was interrupted by Eugene, who felt guilty and asked to be baptized once more. Jesse however, told him it was too late. Eugene believed that no matter how hard he tried, he would always be the same. Inspired by Eugene's words, Jesse went to Linus' home. Jesse told Linus to forget about the young school girl he spoke of and dunked his face in hot water. Due to Jesse's divine commandment abilities, Linus literally forgot about her and was left confused on why Jesse was there.

With the sun set, Cassidy buried DeBlanc and Fiore's body. However, the two are then seen very well alive, interrogated by Hugo Root. The two claimed that they were with the government.

The following day, after realizing he had made Linus stop and forget his actions, Jesse went to visit Tracy. Jesse told Tracy he would try something new and told her to open her eyes. 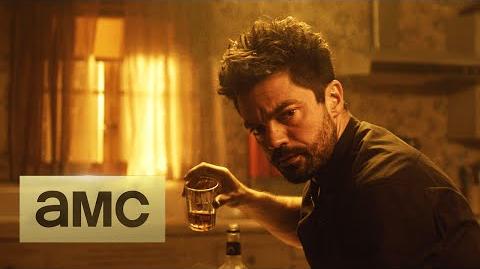 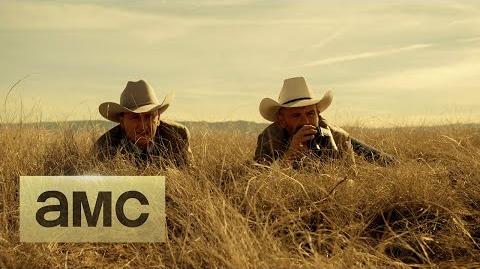 Dan Mumford for Preacher episode 101.
Add a photo to this gallery

Retrieved from "https://preacher.fandom.com/wiki/See?oldid=11925"
Community content is available under CC-BY-SA unless otherwise noted.