"Monster Swamp" is the third episode of the first season of Preacher, and the fourth episode overall. It aired on June 19, 2016.

Jesse makes Quincannon a bet he can't refuse, Cassidy works to fend off the angels, and Tulip tries to bring justice to Annville.[1]

Lacey ran from the city to the middle of the field at night. She was eventually stopped by Clive, who shot her with a paintball gun. Suddenly, Lacey fell into a sinkhole.

Jesse had a flashback of his younger days where he prepared All Saints' Congregational for Sunday service. Cassidy then told Jesse about Fiore and DeBlanc. Jesse however, payed little attention. Cassidy told Jesse to leave Annville but Jesse simply drove off.

Lacey's body is pulled out of the sinkhole where she fell. Odin Quincannon warned his employees and the Toadvine prostitutes to be careful around the area. Tulip was upset with how Lacey's death was reacted to but Mosie didn't care much either. Tulip then watched as Lacey's corpse was hosed down.

Jesse came by Emily's house and suggested they raffle off a flat screen TV to boost attendance. Jesse also told Emily of a scheme he had planned that would lead many to their church.

In another flashback, Jesse smoked with Tulip O'Hare and a few friends. Jesse was then caught by his father and whipped in front of his friends.

At Sundowner Motel, Fiore and DeBlanc were furious at Cassidy as he had not brought Jesse, though Cassidy told them he only had agreed to talk to Jesse about it. Cassidy then told them he would convince Jesse to go to them for cash. When Cassidy left, Fiore expressed his doubts on Cassidy. Fiore then suggested they should let "them" know what's going on. DeBlanc warned him however, that they would be punished as they had no permission to come to Earth. Using the money he was given by DeBlanc and Fiore, Cassidy went to Toadvine.

While playing Q*bert, Odin was alerted that the mayor had arrived. Miles inquired about the sinkholes in Annville, though Quincannon evaded Miles. Miles suggested that Quincannon should consider the partnership with Green Acre Group, though Quincannon urinated on their brochure.

At Sundowner Motel, DeBlanc and Fiore had a phone call. The two were relieved when they learned it was only the front desk calling. Fiore told them they would be checking out soon. Fiore went to the front desk and asked for a burger, though he was told the motel didn't have a restaurant or room service, only a vending machine.

Emily returned with the flat screen TV they planned to raffle off. After relieving Miles from his babysitting duties, Miles offered they share a drink.

At Toadvine, the prostitutes and QM&P employees gathered to remember Lacey. After Tulip and Clive argued, Mosie told everyone that a free hour was on the house. Shortly after, Tulip went upstairs and whipped Cassidy, believing he was Clive. Cassidy fell out the window, leaving a glass shard punctured in his neck. Tulip held Cassidy in a car while on their way to a hospital, where Tulip apologized for her anger issues. Cassidy asked for a kiss from Tulip, which she had done. When they arrived, Tulip asked for a doctor though Cassidy had walked off. Tulip followed his trail of blood and found him drinking from a blood pouch.

During another flashback sequence, a young Jesse is woken up by his father as he is taken to QM&P. Jesse awaited outside and stole an ashtray. When his father left the office, Odin Quincannon yelled at John to denounce God. Later, John told Jesse that some people were beyond saving.

Back in the present, Jesse and Odin built a model of Alamo. During which, Jesse asked Odin to come to his church. Quincannon denied Jesse's invite. Jesse told Odin he could make him but Odin reminded Jesse that wouldn't be a Christian thing to do. Jesse then offered Quincannon he would hand over his father's land if Odin didn't leave a Christian after Sunday.

At the service, Jesse had a packed house for the first time. Jesse told them that they had turned their back on the lord but it wasn't too late, vowing to bring each one of them back to God. Jesse asked Quincannon to serve god but Odin still refused. As he walked out, Jesse used his divine commandment to force Odin. When Jesse asked once more, Odin told Jesse he would.

Back at Sundowner Motel, DeBlanc and Fiore had a call. Believing it was the front desk calling again, the two were shocked when their phone contraption rang, finally getting a call from "them". 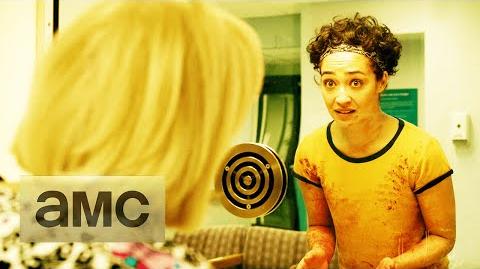 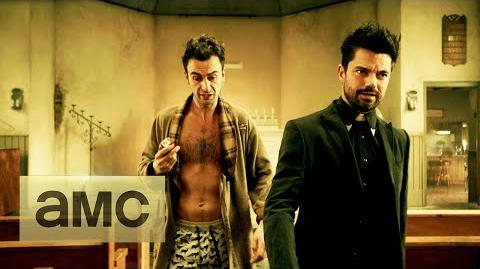 B. Methe for Preacher episode 103.
Add a photo to this gallery

Retrieved from "https://preacher.fandom.com/wiki/Monster_Swamp?oldid=10119"
Community content is available under CC-BY-SA unless otherwise noted.