Marie L'Angelle was the grandmother of Jesse Custer. Centuries ago, she made a deal with Satan for a long life in exchange for her soul when she finally passes. Madame L'Angelle has a twisted way of loving her family, going as far as killing her own daughter. When she found out about Jesse Custer, she had Jody and TC bring him to her and took him in as a L'Angelle. Eventually he ran away but came back, where she had Jesse offer his soul as a debt payment for Tulip O'Hare's revival. When she learned Jesse was in possession of Genesis, she signed Jesse's soul over to Satan. Despite this, Jesse drained her soul, killing her.

When Marie was young, she fell in love with a man and used a draft on him to make him love her. However, she eventually killed him.[1] At some point she made a deal with the Devil and gained the ability to extend her life by eating souls. In exchange, however, once she did die, her soul would go straight to Hell.

In 1990, Jody informed Marie of her daughter, Christina, hiding a piece of paper. Before she can be questioned, Christina flees Angelville, though she is soon caught and brought back. When Christina swallows the piece of paper rather than have it be discovered, Marie orders Jody and TC to hold her down while she cuts her open. After discovering Jesse's photo, she orders her daughter to be put in the soul chair, and then orders Jody and TC to find and kill John Custer and bring his son back to Angelville.

After Jesse's father was killed, Jesse's grandmother took the former in. She tortured her grandson by stuffing him in a coffin and drowning him in a swamp until he accepted himself as a L'Angelle and grateful for God killing his father.[2] Jesse was made to help with the family business, being employed as a parking valet, salesman and eventually showman at the Tombs. When Jesse accidentally killed a chicken in his rage, he asked his grandmother to bring it back to life. She agreed, though not before cryptically warning him that everything has a price.

One day, Jesse informed her that he wanted to leave Angelville to go find Tulip. Marie mocked the idea, as well as him personally for not taking his revenge yet. This prompted Jesse to try to murder her with a baseball bat in her sleep, though he ultimately relented, and left Angelville shortly afterwards.

When Tulip is shot by Featherstone, Jesse has no other options but to seek help from his grandmother. She admonishes Jesse for leaving his family high and dry, as well as leaving the business vulnerable to competitors. She agrees to bring Tulip back to life once Jesse makes a blood contract with her, obliging him to repay his debt before he can leave. She tasks Jesse and Cassidy with gathering ingredients required to resurrect Tulip. While Cassidy fetches some of Tulip's favorite things, Jesse and Jody go to retrieve the transpoil from the Boyd's. The mission is successful, though once they return, Jody challenges Jesse to fight him for the transpoil. Jody is victorious, though Marie stops him from crushing Jesse with his truck. The resurrection is successful. Later, Jesse talks with his grandmother. He contemplates killing her but Marie dares him to try and see what happens.

The next day, Marie has a chat with Cassidy. She recounts the story about a man she loved but who didn't return her feelings, so she sprayed him with a love potion. Afterwards, the man couldn't get enough of her, but Marie, having grown tired of his affections, eventually killed him. She then gives Cassidy the same love potion, and encourages him to use it on the woman he's in love with (apparently sensing it's Tulip O'Hare). When she finds out Jesse organized a meeting with Starr behind her back, she strangles him using the bloody handkerchief she used earlier to make a blood pact with him.

Tulip, having interrogated Sabina Boyd, devises a plan to kill Marie, as it's the only way to free Jesse from his blood oath. Before she can act, however, she (along with Jesse) gets into an altercation with Jody and TC over having facilitated Cassidy's escape. While Jesse is placed in a coffin, Tulip is handcuffed in a bedroom and guarded by Jody until Marie can decide what to do with her. Although furious, she's reluctant to kill Tulip, as Jesse would probably refuse to work for her anymore. To vent her frustrations, she engages is some kind of sexual role-play with TC, though it's to no avail. Eventually, she decides to have Tulip's soul drained anyway, but before anything can come of it, she comes face-to-face with Tulip, who managed to escape her confines. In the ensuing fight, Tulip strangled her until she stopped breathing. Unfortunately, this also causes Tulip to collapse lifelessly on the floor, as during her resurrection Marie linked her own life to Tulip's, ensuring that if she died, Tulip would die as well. Luckily, Jesse was successful in resuscitating Marie, saving both of their lives.

Unfortunately, Marie is still weak and won't last another day without souls. Jody and TC want to save her by draining Tulip's soul, but Jesse convinces them to rob Sabina Boyd instead. Before they embark on the heist, Marie sends Jody on a secret mission which, as it turns out, is eliminating the Boyd clan and kidnapping Sabina. Once Jesse comes back with the souls, he is knocked out so as to not interfere. Sabina's soul is drained, as punishment for plotting to kill Madame L'Angelle. Afterwards, Marie wants to put Sabina in the Tombs, but the latter is mercy-killed by Jesse before that could happen.

A few days later, Herr Starr arrives to negotiate Jesse's release from his contract. After rejecting Starr's proposals (by urinating on his shoes), Marie makes it clear she wants souls. They eventually come to an agreement that would see Marie lend Jesse to Starr in exchange for hundreds of souls from the Soul Happy Go Go vault. Unfortunately, Starr can't simply give her the souls, as that would arise suspicion from the Allfather. Instead, he organizes a heist which would see Tulip and Jody, as well as one of his agents travel to Osaka. Before they depart, Marie warns Starr that she will kill her grandson without a second thought if he tries to double-cross her.

After everyone sets off, TC asks Marie about Genesis, which gives her an idea. She summons Satan to her home to make a new deal with him: If Jesse kills her, his soul (along with Genesis) will go to Hell in her place. Marie also arranges for Tulip to be taken to Hell (alive) for trying to kill her.

Jesse comes back to Angelville to kill Marie, as she knew he would. After dispatching of TC and Jody, Jesse confronts his grandmother. After Jesse uses the Word on her to make her release both himself and Tulip, she informs him of the new deal she made with the Devil, infuriating Jesse. Jesse finds another way to get back at her, however, using the Word to order her to destroy the souls from Osaka, much to her horror. Still not satisfied with his revenge, Jesse comes back and straps her into the soul chair, then proceeds to drain the souls from her body, killing her.

Marie is a ruthless, manipulative, greedy and all around vile woman. Every deed she does, even if it's seemingly good, is motivated by self-interest. Despite her preachings about the importance of family, she is more than willing to sacrifice them if it's to her benefit, making her a hypocrite. This emphasis on family is more than likely a manipulation tactic, keeping those that serve her (namely Jesse and Christina) in line. Marie is also very vengeful, and is unlikely to forget a slight. Her punishments are exceptionally cruel, from soul draining and enslavement to stuffing family members in a coffin and imprisoning them at the bottom of a swamp. She is shown to be afraid of death due to a deal she made with the Devil, not wanting her soul to go to Hell. All of the above makes her death at the hands of Jesse almost poetic, first being forced to destroy the souls she worked so hard to obtain and then being drained of her soul herself. 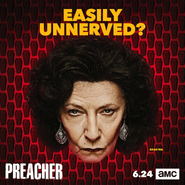 Retrieved from "https://preacher.fandom.com/wiki/Marie_L%27Angelle?oldid=13344"
Community content is available under CC-BY-SA unless otherwise noted.