"Proud of you, boy"
—Jody's final words to Jesse[src]

Jody was a henchman of Marie L'Angelle. Jody was sent to kill John Custer and bring Jesse to Angelville. Since then, he taught Jesse how to fight, but always bested him. After Jesse returned after running away, he was still able to best Jesse until their final showdown in the Tombs, where he was finally defeated and expressed how proud he was of Jesse before collapsing to his death.

In 1990, Jody discovered Christina L'Angelle hiding a piece of paper. He informed Madame L'Angelle, but before they could question Christina, she escaped from Angelville. Jody, accompanied by TC, intercepted the bus Christina was on. She tried to fight him, only to be slapped into a window for her troubles. He and TC brought Christina back to Angelville, where Marie questioned her about the piece of paper. Rather than have it discovered, Christina swallows the paper. Upon seeing this, Marie orders Jody and TC to hold her daughter down while she cuts her open, shocking even Jody.[1] When she discovered Jesse's photo, Madame L'Angele ordered Jody and TC to find and kill John Custer and bring his son Jesse back to Angelville. They successfully completed the mission, with Jody personally executing John.[2]

During Jesse's stay in Angelville, Jody seemed to act as a primary guide for Jesse when it came to running the family business. Most notably, he was the one that taught Jesse how to fight, often challenging Jesse to beat him, though he never managed to. The two apparently had a falling out before Jesse left Angelville.

When Jesse returned to Angelville due to Tulip's death, the former came to him for help. Jody welcomed him back with a hug, much to Jesse's surprise and agreed to help, telling him they have a lot of catching up to do. Jody took Jesse to the Boyd's and took out several henchmen before stealing a sample of transpoil. When they returned to Angelville, Jody challenged Jesse to finally beat him in a fight. Jody was barely fazed with each hit and nearly killed Jesse by crushing him with his truck, though he was stopped by Madame L'Angelle.[3]

Jody later questions Tulip about her resurrection, and gives her a gun for target practice. He captures Hoover while Tulip tackles and beats Featherstone. He is prepared to execute them and dump their bodies in the swamps, when Jesse says he has better idea- throwing them into the meat grinder. As Jody fires up the meat grinder, Jesse alerts them to Hoover's escape, and the group sets out searching for him. Unbeknownst to Jody, this was a ruse, as Jesse wanted to let Hoover and Featherstone go to gain Herr Starr's trust. Later, he participates in the gun battle against Madame Boyd's men, though this is simply a distraction created by Tulip and Cassidy so Jesse could meet with Herr Starr.

The next day, he drives Jesse around so the later can help reinvigorate the family business. Jesse tries to appeal to Jody, urging him to betray Madame L'Angelle, prompting Jody to elbow him in the face. When TC discovers Cassidy's a vampire, he helps string the Irishman up on a tree, planing to leave him to burn in the morning. Wanting to save his friend, Jesse suggests making Cassidy fight in the Tombs. With Cassidy winning his first match, Jody is excited to fight the vampire, but his plans are spoiled by Jesse, who smuggles Cass out of the Tombs. Jesse later announces the Tombs are closed to the crowd gathered, angering Jody, but before the latter can react, Cassidy returns to fight Jesse. Cass loses the fight, though he manages to escape the Tombs once more.

When TC discovers that Cassidy had escaped once more, he and Jody go to confront Jesse and Tulip. In the ensuing fight, he knocks Jesse out and carries him downstairs. Tulip tries to stop him by holding him at gunpoint, only to find herself in the cross hairs of TC's shotgun, prompting her to drop the gun. While Jesse is placed in the coffin, Tulip is imprisoned in the bedroom and guarded by Jody until Madame L'Angele decides what to do with her. Tulip manages to trick Jody and chain him to a radiator, allowing her to escape and try to kill Gran'ma. Tulip is successful, though unfortunately this also kills her, thanks to a spell that binded Marie's life to Tulip's. Jody manages to free himself and arrives just in time to see the aftermath. Luckily Jesse, who managed to escape the coffin, is able to resuscitate his grandmother, saving both her and Tulip. Unfortunately, Marie is still weak, and won't last another day without souls. Another brawl ensues between Jody/TC and Jesse/Tulip, this time resulting in both Jesse and Tulip being knocked out. By the time Jesse comes to his senses, Tulip has already been strapped to a chair, with Jody and TC preparing to suck her soul out to save Marie. Jesse convinces them to rob Sabina Boyd instead, something they can't do without Tulip. After Tulip stakes the bank out, the tasks are divided. Jody drops TC off to cause a distraction, while he embarks on a secret mission for Marie. This mission, as it turns out, is to eliminate the Boyd clan and kidnap Sabina, which Jody does. After the heist, to insure that Jesse won't interfere, Jody knocks him out so Sabina's soul can be extracted, as punishment for trying to kill Marie. Unfortunately, Jesse is too late to save Sabina, so he kills her out of mercy, as a person is nothing without their soul.

To help free Jesse from his debt, Klaus Starr meets with Marie. He offers her her hundreds of souls from the Soul Happy Go Go vault in Osaka, as the company is a subsidiary of Grail Industries. Unfortunately, he cant simply give her the souls, as that would arise suspicion from the Allfather. Instead, he organizes a heist and provides one of his operatives, Featherstone, to assist. Featherstone is accompanied by Tulip and Jody to Japan. They arrive undercover as human resources operatives, and Jody assists Tulip in demonstrating inappropriate behavior in the workplace. Later, as Tulip and Featherstone are breaking into the vault, Jody takes care of the security guards, seemingly killing them with a hammer. The heist is successful, and the trio fly back to Louisiana. Jody is contacted by Marie, who informs him of her new deal with the Devil, specifically about Tulip being taken to Hell by the Angel of Death. Tulip manages to trick the Angel into dragging away Featherstone instead, only to discover that Featherstone took the soul briefcase with her. Tulip confornted the Angel on the bus stop for Hell and got the briefcase back. Unfortunatelly, Eugene unintentionally blew Tulip's cover by identifying her, prompting the Angel to drag her off and release Featherstone. Jody retrieved the briefcase and gave Featherstone a ride, only to be forced to pull over when he runs over an animal. Featherstone leaves him to deal with the problem.

Jody arrives shortly after Jesse and confronts him outside Marie's room. Jesse, possessing Genesis once more, orders Jody to drop the briefcase. Jesse tells Jody that he could order him to cut his own throat, but Jody correctly predicts he won't do that. Instead, Jody and Jesse head to the Tombs for one final fight, with TC acting as a referee. Jody fights hard, even shrugging off a nail board to the face, and begins to gain the upper hand, until he reminds Jesse of his father's murder. This prompts Jesse to choke Jody with a chain and simultaneously slam his head against a wall several times, causing Jody to finally collapse, seemingly dead. Jesse orders TC to get some gas canisters, though after TC leaves, Jody gets back up, much to Jesse's shock. Jody smiles and utters the words "Proud of you, boy" before collapsing once more, this time for good.

At first glance, Jody seems to be a laid-back individual, and can even come off as friendly. In contrast, he is actually a very violent person, clearly relishing in the mayhem and destruction he causes. His favorite activity seems to be fighting in the Tombs, often beating his opponents to death. Outside of combat, his main hobby is solving crossword puzzles. His relationship with Jesse is a complicated one. While Jesse clearly despises him for killing his father, Jody seems to genuinely care about Jesse. Jody appeared to act as a primary father figure for Jesse after John's death, doing his best to toughen him up, even teaching Jesse how to fight. However, Jody's "tough love" method often turned abusive, punishing the smallest of infractions with physical harm (for example, violently twisting Jesse's arm for withholding money). It's also hinted that Jody had a somewhat close relationship with Christina, as he strikes Jesse in anger after the latter brings up her name. Despite all of that, his ultimate loyalty lies with Madame L'Angelle, and he will follow her orders without question. The only time he ever seemed reluctant to do so was when Marie ordered him to hold down Christina so she could cut her open. When Jesse finally managed to defeat him in a fist fight, Jody expressed how proud he was of him, before collapsing from the wounds he had sustained. 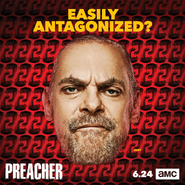 Retrieved from "https://preacher.fandom.com/wiki/Jody?oldid=12619"
Community content is available under CC-BY-SA unless otherwise noted.