"He Gone" is the sixth episode of the first season of Preacher, and the seventh episode overall. It aired on July 10, 2016.

Jesse's actions alienate and endanger those closest to him as we glimpse into his past and finally learn the root of all of his guilt.[1]

Jesse examined the spot where Eugene had been before disappearing. He picked up the program before opening the doors of his church. During the service, Jesse delivered a sermon to a house so packed that a few congregants had to sit out and listen to the speaker outside, during which Hugo looked around for his son. After the service, Hugo asked if anyone had seen his son.

At Quincannon Meat & Power, Odin listened to sounds of animals being slaughtered as he gazed out the window.

During flashbacks, Jesse and Tulip waited outside the principal's office. The two were yelled out for putting three kids in the infirmary, one including Donnie Schenck, who had a nipple bitten off by Tulip by "accident". John then took Tulip home as her mother was in jail and her uncle was too drunk. That night, Jesse prayed to God, thanking him for getting his father to do the right thing.

Back in the present, Tulip chased down kids who stole her uncle's pants. Tulip returned to her uncle, who was passed out on the steps.

At church, Emily and Jesse went over the itinerary. Later, Cassidy confronted Jesse about Eugene, telling him he saw what happened. Jesse refused to answer and left for bible study. Tulip arrived in the kitchen shortly after. Cassidy told Tulip he hadn't told Jesse about their fling. Tulip asked Cassidy if Jesse knew he's a vampire. Cassidy claimed he told him nine times. Tulip told him he had to be lying as he would be rejected by Jesse.

In another flashback, Jesse and Tulip were horse-playing at the All Saints' Congregational church when they were told to clean the dishes by Jesse's father. When Tulip went to get the dish soap, she overheard John on the phone. At night, Tulip went to Jesse in his bed and asked him "Till the end of the world, right?". Jesse replied with "Till the end of the world". The following day, Tulip was taken away by the Department of Human Services. Jesse fought for her and ran after the car but to no success. That night, Jesse prayed to God to send his father straight to Hell.

After a church play, Jesse criticized the actors, telling them to look more terrified. Odin interrupted and pulled Jesse aside. Odin told Jesse that he hasn't been nearly half as successful as his ancestors. Odin then handed over the deed for Jesse to sign. Odin claimed that he may have agreed to serve God but never was a Christian. Jesse still refused. Odin told Jesse he would be back.

Emily joined Cassidy on the porch. Emily told Cassidy she doesn't know Jesse as much as she thought she did. Cassidy reassured her that Jesse is a good man.

Later, Jesse, Tulip, Emily, and Cassidy eat dinner in the Church's kitchen. The four got interrupted by Hugo, who asked Jesse if he saw Eugene. Jesse is left in silence. The four then had their attention taken away after the potatoes in the oven caught fire. After the fire was extinguished, Jesse told Hugo he hadn't seen Eugene. Emily reminded Jesse that he did see him, though retracted and told Hugo she saw Eugene leave.

Jesse walked Hugo out to his car. Cassidy hit Jesse with a fire extinguisher and asked about Eugene once more. Jesse told Cassidy that Eugene wasn't innocent. Jesse revealed that Eugene had shot Tracy Loach in the head over rejection then had tried to kill himself. After an argument, Cassidy told Jesse that Tulip was right about him. Cassidy tossed Jesse the fire extinguisher. Cassidy then told Jesse it was for him, unless he was going to let him burn. Cassidy removed his hoodie and shirt and stepped into the sunlight. Cassidy burst into flames.

An angry Jesse stormed back into the kitchen, slamming the fire extinguisher on the table. Tulip asked Jesse what he did to Cassidy. Jesse slammed Tulip for being an O'Hare, much like his father did. An upset Tulip stormed out. Emily told Jesse that when she first saw him return, she believed him. Jesse called her stupid and to go home.

In another flashback, John hid his son underneath the bed. John was knocked unconscious and the men found Jesse. The two Custers were pulled out. John told Jesse to be one of the good guys ,as there were too many of the bad. Jesse promised and apologized as he revealed he asked God for this. John was promptly executed.

In the present day, Jesse ripped the floor panel off. Jesse then used his powers, asking Eugene to come back. Outside, Odin and his men marched toward his church. 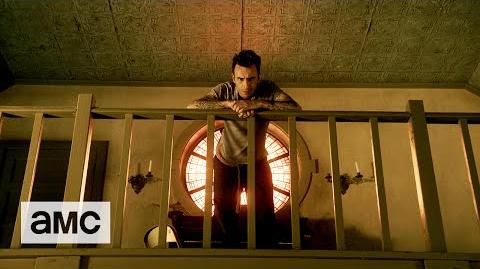 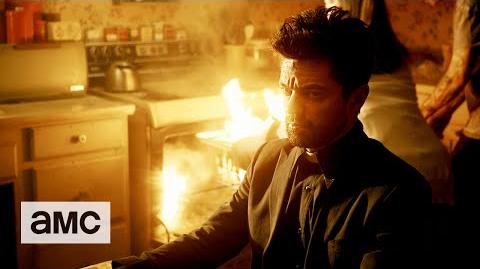 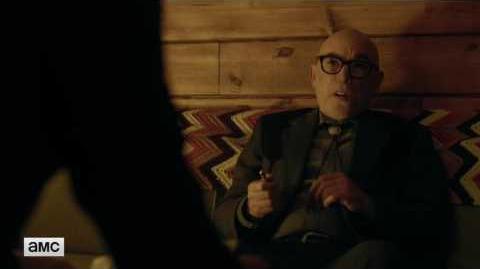 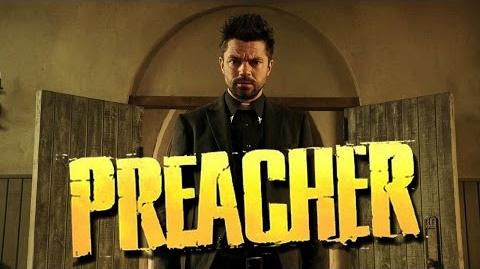 Clark Orr for Preacher episode 106.
Add a photo to this gallery

Retrieved from "https://preacher.fandom.com/wiki/He_Gone?oldid=13698"
Community content is available under CC-BY-SA unless otherwise noted.