"Finish the Song" is the eighth episode of the first season of Preacher, and the ninth episode overall. It aired on July 24, 2016.

Jesse is on the run while those around him face life-altering decisions. The Cowboy returns to Ratwater to exact his revenge.[1]

In 1881 in Ratwater, a young kid looked out the window. A shadow cast on him. At Cooley's, a Chinese man sang a song. The man stopped as The Cowboy walked into the saloon. Preacher MacReady told The Cowboy all was welcome, including the Butcher of Gettysburg. He told him to share his love with Jesus. The Cowboy told MacReady he loved his horse and family. He then told him that Jesus can join all of them in Hell, as he dumped the heads of several children on the ground. MacReady asked The Cowboy what he wanted. The Cowboy killed MacReady and demanded the Chinese man to finish the song. The Cowboy proceeded to slaughter everyone in the saloon. Once the Chinese man finished his song, The Cowboy beheaded him. A storm then began brewing.

In the present, Hugo drove Jesse to the sheriff station. Hugo asked Jesse where Eugene was. Jesse told Hugo that he sent Eugene to Hell. Hugo told Jesse that an old friend of his worked at a penitentiary that didn't welcome child killers, and that one child killer felt so unwelcome, he jumped off his bunk until he killed himself. Hugo told Jesse he would wish he was in Hell. Jesse told Hugo he would see him on Sunday, then he jumped out of Hugo's car and ran off. Hugo stopped and searched for Jesse, only to learn he had jammed a pen in the door to escape.

Fiore and DeBlanc headed to a travel agency. The travel agent offered them a trip to Nova Scotia for the lobster festival. The two demanded to go to a place much further south, Hell. Though reluctant, the agent ultimately agreed. The agent closed the blinds and had them pay in advance as she printed their tickets out.

Emily arrived at Walter's house. There, Tulip O'Hare told her that Cassidy is a vampire who needs the blood of living animals. Tulip told her to feed Cassidy once he wakes up. Emily told Tulip that Jesse was in trouble. Tulip stated that she didn't care and that she was free to date him. Emily replied that she was "seeing" the mayor. Tulip then left, telling Emily she was headed to Albuquerque to kill a man.

Under a bridge, Jesse joined two homeless folks for breakfast. The two offered him pancakes. The two told Jesse they heard that he planned to bring God almighty to church on Sunday. When the two asked how we would do so, Jesse told them "You'll see".

At Sundowner Motel, DeBlanc and Fiore packed their belongings. DeBlanc told Fiore they should call Heaven and confess everything. Fiore reminded DeBlanc they would likely be separated forever. DeBlanc challenged Fiore to a coin toss. Though the coin had them go to Hell, they did a do-over, which had them call Heaven. Fiore went to get the Heaven phone but failed to find it, claiming he had it under the bed. Jesse, who hid in a corner, was holding the heaven phone.

While cradling a bunny in Walter's home, Emily watched Psycho. As Cassidy screamed for someone, Emily hatched a plan. In Quincannon's office, a wrestling match occurred. Miles, who was watching, received a call from Emily. Emily begged for help, claiming someone was going to kill her. Miles rushed over to Walter's house. As Miles walked into Cassidy's room, Emily locked him in, leaving Miles to be devoured by Cassidy.

Back at Sundowner Motel, Hugo Root investigated Fiore and DeBlanc's room. Hugo found Susan disarticulated in the bathtub. Hugo told her he would get an ambulance. Susan begged Hugo to kill her. Though reluctant, Hugo choked her to death. Susan reinvigorated and watched Hugo suffocate her past body then walked off.

At a dam, Fiore and DeBlanc were picked up. The shuttle driver told them no carry-ons. Fiore sadly said he brought his comics. DeBlanc told him "It's alright my dear, leave them behind".

At Walter's backyard, Emily released the caged animals. Jesse arrived and asked for Tulip. Jesse was told that Tulip went to Albuquerque and that Cassidy is inside. Jesse walked into Cassidy's room finding him huddled in a corner. Cassidy told Jesse to go away. Jesse apologized for letting him burn. Cassidy told him that Jesse extinguished him and that was all that mattered. Jesse then offered to help dispose of Miles' dead body.

At Quincannon Meat & Power, Odin explained that Jesse escaped from Hugo. Odin, however, told Donnie that on Sunday, Jesse would denounce God and the greatest lie ever told would be untold.

Cassidy played around with the Heaven phone, noting it didn't work. Jesse told Cassidy that they needed angel hands. Cassidy told Jesse he could get one. Jesse then left Tulip a voice mail, reminiscing on their past. Jesse recalled when they were on the run from the Rodriguez brothers, they stopped by a diner. Jesse particularly remembered how Tulip was persistent on getting M&M pancakes, where she told the waitress to bring her pancakes and M&M's, which Tulip would put the M&M's in herself one by one. Jesse ended the call with "It's just you till the end of the world,". On the other side, Tulip looked at Carlos, who she'd tied up. Tulip picked up a mallet and approached Carlos.

In Ratwater in 1881, the Cowboy's story was played over and over. Eventually, one of the moments concluded with The Cowboy being approached by Fiore and DeBlanc, revealing they were in Hell. DeBlanc offered to release him from Hell if he helped them with a job. The Cowboy shot DeBlanc. The Cowboy asked what the job was. Fiore told him they wanted him to kill a preacher. As the storm continued, it transitioned to the very same spot in Annville in present times. Jesse and Cassidy dug up Fiore and DeBlanc's old bodies. Cassidy recovered one of the angel hands. The two then dragged Miles into the grave and buried him as Cassidy asked about the rumors of Jesse bringing God to Annville. 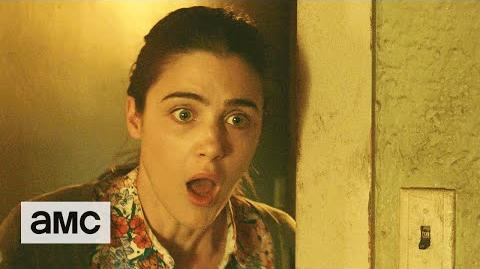 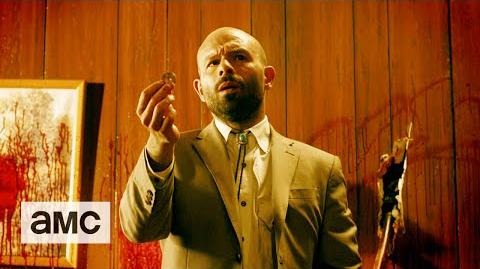 Retrieved from "https://preacher.fandom.com/wiki/Finish_the_Song?oldid=13704"
Community content is available under CC-BY-SA unless otherwise noted.