Operative of the Grail

Second Lieutenant F.J. Hoover was an operative of the Grail under the Samson unit. After numerous failed attempts of capturing Proinsias Cassidy as leverage against Jesse Custer, he was kidnapped by Les Enfants du Sang. While they agreed to kill him, Eccarius decided it would be better suited for him to be turned into a vampire. As such, he returned to the Grail, but was finally killed by Herr Starr who exposed him to the sun.

Hoover, along with Lara Featherstone and other Grail operatives were sent to New Orleans to confirm their intel on Jesse Custer. When he encountered Jesse at a bar, he directed Jesse to Featherstone.[1]

After Featherstone got close to Jesse and confirmed his power, Hoover was told to send Jesse's case up to the Samson unit.[1]

Later, Hoover and Featherstone moved into the same flat of Jesse, Cassidy, and Tulip where they closely watched the three through surveillance. However, Hoover noted they are risking being compromised. After Tulip knocked on their door to patch the wall, Hoover cleaned their apartment to hide their operation from Tulip, though failed to hide a gun which Featherstone played off as a weapon of self defense against her ex.[2]

Within the conspiracy against the Allfather, formal head of the Grail, Hoover was instructed by Herr Starr to track down and kidnap the vampire Cassidy in order to use him as leverage in forcing Jesse to become the new Messiah. Cassidy was separated from Jesse and Tulip. While on his own, he teamed up with the poser vampire cult "Les Enfants du Sang", led by the (real) vampire Eccarius.

In his first attempt to catch Cassidy, Hoover activated a local secret special unit of the Catholic Church, a sleeping cell. They were specialized to hunt down unholy creatures like vampires. At night, they ambushed Cassidy and Eccarius and tried to tranquilize the former, though unsuccessfully. Cassidy turned out to be immune against the substance and, subsequently, he killed off the Catholic radicals. Hoover, however, escaped the scene.

In despair and fear of disappointing his boss Herr Starr again, he decided to do the job himself. In an amateurish and aimless attempt he disguised himself as a cab driver and gave Cassidy and Eccarius a ride home. Seeing, where they hid, he equipped himself with weapons and garlic. However, he already blew his cover and the vampires confronted him.

Within the "Les Enfants du Sang", Hoover was held as a prisoner and hostage with whom Cassidy tried to blackmail Herr Starr. He turned down these attempts and did not care if his operative died at the hands of the cult members. Cassidy plead to kill him on the spot while Eccarius preferred to turn Hoover into a creature of the night as well. They left Hoover the choice who decided to become a vampire.

It was up for Cassidy to turn Hoover, whom he repeatedly asked if he really wished to do this. Hoover, however, feared death too much so this was not much of a choice for him. After being turned, Eccarius planned to send him out into the world like his other "children" to spread the word in case for vampires. The dark truth was that Eccarius killed and fed on all his children instead of bringing them to the airport to "fly."

Right before Hoover could meet the same fate, Cassidy found out about Eccarius' dirty business and confronted him and Hoover in the car. While Eccarius and Cassidy began to fight and the latter lost consciousness, Hoover grabbed the chance and ran off.

Hoover's Return to the Grail and his Death[edit | edit source]

Hoover was later seen back at the Grail offices with his boss Herr Starr who just had succeeded in killing the Allfather. Nevertheless, Jesse escaped with Genesis as well as his soul. Hoover reported his adventure, but Starr barely listened as he tries on wigs as replacements for hats in order to hide his mutilated baldhead. Jesse ordered him via Genesis to not wear anymore hats. Hoover swore that the fact of being a vampire won't compromise his work in any ways.

Hoover seemed to return to his old mission of kidnapping Cassidy. This was not revealed until he showed up again at the basemant of "Les Enfants du Sang" after Cassidy unmasked Eccarius in front of his followers and, eventually, turned all of them so that they could feed on their former master. By now, the cult was at the mercy of Cassidy himself, filled with vampires who were confused and unsure about what to to with their lives.

As Hoover came back, the young vampires celebrated him as one of them and also Cassidy welcomed him as a friend. Talking to Tulip on the phone, he said that Hoover was one of the good guys now. He even offered him to get wasted together with drugs.

Hoover has other plans although he claimed to have abandoned the Grail, because the benefits aren't too well. He brought a "present" for Cassidy which turned out to be a simple umbrella. However, Hoover urged Cassidy to use it right now while unpacking his own. Cassidy hesitantly obeyed and after spanning the umbrellas helicopters of the Grail removed the complete house thus exposing the basement to daylight. Cassidy and Hoover listened to the other vampires crying as they burned alive in the sunlight. Hoover apologized to Cassidy, telling him that he lied about the Grail and that the benefits are actually quite good. Cassidy is then arrested by Herr Starr and brought to Masada, the Grail headquarters.

Hoover seemed to be regained Starr's trust as he was seen to stand right behind him at Masada as Starr inspected his troops in his role as the new Allfather. However, Starr is triggered by Hoover's colorful hat which protected the fresh vampire from the sun. Since Starr is not able to wear hats anymore he is offended by Hoover, confronting him about the hat. Hoover retold his story about being turned into a vampire. Starr replied that he thought about this as a joke. Then he removed the hat from Hoover who caught fire in disbelief collapsing and turning into ashes. Starr commented Hoover's death with the sole word "idiot."

Right after Hoover's death Starr told Featherstone that they need a new Hoover. Later on in the series, a new Hoover was indeed introduced at the Grail. He seemed to be way more efficient and intelligent as the old Hoover but still called "new Hoover" by Starr himself. Eventually, the new Hoover turned out to be an undercover detective who conspired against Starr making him a traitor to the Grail's cause. In retrospect, the old Hoover might have been naive and inefficient, but he never questioned Starr's authority and he was loyal to the end.

Behind the scenes[edit | edit source] 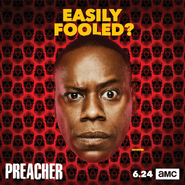 Retrieved from "https://preacher.fandom.com/wiki/F.J._Hoover?oldid=13728"
Community content is available under CC-BY-SA unless otherwise noted.